The Small Press and The Artist: In Conversation with C F Sherratt

An inseparable part of The Lit is its dazzling illustration. The Lit Platform’s Akvile Peckyte talks to Issue Two’s illustrator C F Sherratt about his philosophy and an artist’s relationship with text and autonomy.

A multidisciplinary artist whose illustrations brought the themes of The Lit’s Issue Two to life, C F Sherratt is a thinker as much as doer. From resilience and partnership, to how art can complicate expressions of gender, we lost ourselves in Sherratt’s way of seeing the world for an hour, as we found out more about his work, his influences and the challenges and breakthrough moments of his Lit commission. 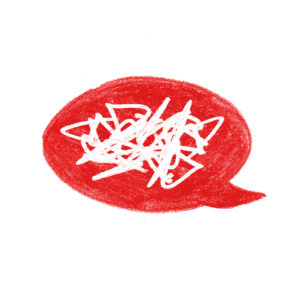 How long have you been working as an illustrator and how did you get into it?

I finished my BA in graphic design at Sheffield Hallam in 2014. I’d signed up for that wanting to become a graphic designer, but I got ushered towards a more illustrative way of working while I was there. Then I did a Masters in illustration at Falmouth University, because I had felt I wanted to do something that was very discipline specific. After that year I started taking on some commercial jobs. I’d been publishing comics for a little bit before that as well. The two things interconnect, but it depends how you define illustration.

What would you say is your personal style and how did you come to develop it?

I think it’s been quite a long process and I think it’s got quite a distinct language, but it has changed over the years. There are things that I keep and things that I discard as time goes by, normally not even very consciously. I guess a lot of it comes from looking at a lot of different types of work. I look a lot at historical and religious painting, early science fiction artwork, and contemporary fine art painting.

What would you say are your biggest creative influences?

I think it’s hard to say, especially with religious artwork because a lot of it has come from different people working in a house style, if you will. I’m really into Hieronymus Bosch and I really like William Blake; I saw a retrospective of his work last year which was amazing. And then on the comics side, or on the more illustration side, people like Mobius, Daniel Clowes and Charles Burns. 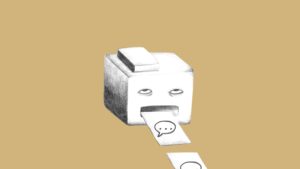 I’m really interested to hear more about the philosophy and thoughts behind your work. How do you shift between different mediums and challenge their boundaries, and how does the philosophy of boundary-pushing affect your work?

Illustration is something that people want to put in a box a lot, and is seen as kind of like a craft rather than an art form, like you’re providing a service. In a way, a lot of fine artists who are making their paintings or doing their performances get to exercise a lot of autonomy. I think that with my illustration work, I want to be able to do that too. And I think that any illustrator should be able to do that. But in terms of working in a multidisciplinary way, I think my projects are usually quite compartmentalised. I’ll think of something that I want to do, and think of the best way of approaching that. Maybe not when I start formulating it, but by the time I’ve started making it, I kind of know what form it’s going to take. Do you mean the boundaries of particular types of work or the boundaries of what a particular type of work can do or be?

A lot of my visual work and more comics-based work tries to do things with the format of a still image, with regard to a passage of time or presenting multiple images as part of a composite image. And that’s one of the times I’m most aware of trying to break boundaries, because I think that comics invite a lot of comparisons with film. As someone who doesn’t make film but does make comics, I’m quite conscious of wanting to find what those things are that I can do that a filmmaker can’t do.

Coming to The Lit commission, how did you channel your personal practice into creating a visual response to a collection of written works in a digital space? You mentioned that at the time you were making the illustrations, most of the articles had not been submitted yet.

I think a lot of it was kind of almost being preemptive, and I do quite a lot of list-making before I do this kind of work. So I tried to make lists of words or images that might crop up in an article that’s about this thing. Then, trying to eliminate anything too obvious – so I would make a big list and strike a lot of stuff out. Thinking about trying to make composites of these things, or images that could interweave these different things. Quite a lot of it just draws on stuff that I’ve read around that, or stuff that I’m interested in around that that I want to draw.

I think that the most challenging part was trying to steer clear of very obvious and direct visual representations of things. There were a lot of opportunities where I could’ve used lgbtqia+ symbolism or something like that, and  I think sometimes that can be detractory, if the text is very obviously about that thing already. So, on that particular article, I have been interested for quite a long time in a sliding scale of masculinity and femininity, and what that means in terms of your kind of gender identity and biology, and that was where that one came from. I kind of broke my own rules a few times. I think at the start of the process, I said I wasn’t going to draw any books, and I ended up drawing maybe three or four books, but it was just important to me that those images also did something else, and I made sure they did. I think the most rewarding thing was just being given a free pass to make some animations, because it had probably been seven years since I had last done any animations. I tend to work on quite little timescales a lot of the time and I don’t usually have much time to play. 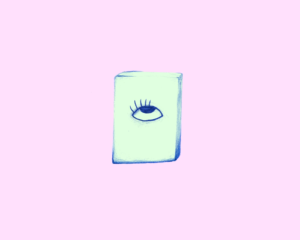 How did you find the experience overall and looking back, is there anything you would do differently?

I think you can always have more time. Maybe if I had the articles, it would’ve probably been quite a different set of images. I had some of them, but I think it’s interesting how well it all sits together, considering that some of them I constructed as something to accompany this thing that I didn’t have, and some which were much more grounded in a piece of text that I was reading. But I think I was really quite happy with the way that the images accompanied the text at the end. It was just trying to make something that’s impactful and specific that isn’t going to get in the way of whatever it ended up accompanying, which is almost like the opposite way around to how an illustrator would normally work. I quite enjoyed that, and I think one of the things I try quite hard to do in my work is to do something different with the images from what the text is doing.

I find that so surprising that you didn’t have most of them. Because to me, they make perfect sense when I read the article. And it’s interesting to have that removal from the situation – by not having the text and just having the bare bones, you can get something really interesting out of that, I think.

Yeah, I think so too. I think it’s kind of like when a lot of writers talk about not giving the reader everything, and letting them put two and two together, which makes the most rewarding kind of prose. I think it’s quite a similar thing. Giving the reader an image and giving them the text and letting them put them together, and then you get all of these divergent readings, which I think is really interesting.

In the context of this symbiotic relationship between reading and imagery, how do you think small presses and independent illustrators can support each other? 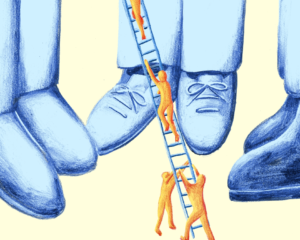 I think a lot of it is just about using your platform to promote each other’s work. So we, Atlantic Press, whenever we’ve got any downtime between publications, we’ll fill up our feeds with relevant stuff that’s coming out that maybe involves people that we’ve worked with before, or presses that are run by people that we know, or presses that we like. And I think it creates this mutually beneficial environment, because it makes it look like things are happening where we are, and it also pushes the work of people that we work with, and creates a happy atmosphere.

If you could illustrate any book, poem or prose piece, what would it be and why?

I thought about this one quite a lot. There are a few different things that I thought of, but I’ve been kind of obsessed with this book by the Japanese author Yukio Mishima for a very long time, and I’ve made various plans to do something with it, and I’ve started to make a run up and then backed up. It’s this book called The Sailor Who Fell From Grace With The Sea, and Yukio Mishima was one of the most popular authors in Japan in the late 1950s, early 60s. It’s this story about a young boy in a Japanese sea port whose father is lost at sea, and his mother meets this sailor, and they fall in love. It’s kind of a deep study about glory and masculinity, and I took it as this book about how dangerous masculine hardness can be, and I guess this aspiration to be strong in an animal sort of sense. I found out many years later that Yukio Mishima was very staunch in his belief that you should transition from boyhood to this hard, statuesque masculine ideal. It sat quite strangely with me, and I had read it in this completely opposite way. I’ve always felt like I’d quite like to do something with it, where I could bring my own reading into the conversation.