How the light gets in: Reflections on anxiety and art in a climate crisis

Can art save the world? Publisher Anna Kiernan looks behind the facts and finds answers in experiences, thought and emotion.

We are sitting spotlit on the stage at the front of an otherwise pitch black church in Bodmin.

We are here to address the question: Can art save the world?

A familiar feeling of rising panic is building inside me. Would it be OK if I just… bolted?  I have my notes in front of me but it turns out the notes are irrelevant to the questions and, in any case, the questions aren’t the ones they said they’d ask in the run-through. I am sat between two talented, accomplished women: Cornish folk musician Martha Tilston and BBC journalist Ritula Shah, who’s chairing the event. To the left of Ritula are two men, one of whom is climate change expert James Dyke.

Image by Mathias Wagner via Unsplash

There is another voice on the panel that no one can hear except me. It is saying: You don’t belong here. You have nothing to say. Go home. Stop wasting everyone’s time. When Ritula turns to me with a question my brain stops working. Thick fog descends. I cannot process the question or answer it. Ritula sees my unease and reframes it. I grasp for a passable answer. She moves on.

“Sometimes the gravity of the subject matter forces us to push through our individual anxiety.”

It was touch and go as to whether I’d make it to the event. Like many teachers, my confidence has taken a hit during the pandemic and my anxiety is on red alert. Being back in the classroom feels nerve-wracking, as we navigate the space between rules and guidance relating to masks, space and hybrid teaching. Many of my colleagues feel wrung out after the intensity of teaching online for a year and then returning to campus in such uncertain times.

I am not proud of the fact that I often experience intense anxiety before public speaking. It is something that makes me question my chosen profession (as a lecturer). Sometimes the gravity of the subject matter forces us to push through our individual anxiety into a space of, at the very least, engaging in the conversation. But sometimes it is hard to speak up, too.

Here are some things I thought about but didn’t say on Saturday.

The strength of inertia

I guess the problem for people like me, who are wholeheartedly located within the humanities, and who feel uncomfortable around large data sets and scientific studies, because we don’t have the language or the understanding or the attention span, is that we are not always confident in engaging with the facts of climate change.

“If we, the public, sense an immediate threat we respond differently than we would to an imminent threat, which is how many people perceive climate change.”

It’s a tendency that author Amitav Ghosh speaks to in The Great Derangement, when he says that “my life is not guided by reason; it is ruled, rather, by the inertia of habitual motion” (Ghosh 2017: 54).

Ghosh says this after sharing a story about his mother, who will not move house because of the risk of floods or other natural disasters. She is too attached to her home, her memories. 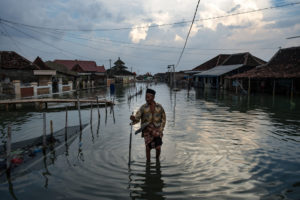 I recently went to a talk by the founder and  former CEO of Innocent smoothies, Richard Reed. He said that what people care about is:

If this is even partly true, it may begin to explain why the green agenda hasn’t become mainstream.

Weather by Jenny Offill is an insightful, witty and reflective account of the way in which climate anxiety permeates our daily reality. It seems to me that Offill is the antithesis of the sort of uber-confident men, from Richard Reed to Timothy Morton, who dominate the conversation (whatever it may be). And yet Weather is also about the three preoccupations Reed cites above. The novel is narrated by a college librarian, Lizzie, and depicts Lizzie’s family life and her near-paralysis in the face of decisions such as whether or not to embark on an affair. The paralysis is a sort of outcome of her broader fears about politics, morality and climate change. Lizzie says: “Suppose you go with some friends to the park to have a picnic. This act is, of course, morally neutral, but if you witness a group of children drowning in the lake and you continue to eat and chat, you have become monstrous.”

“If certain literary forms are unable to negotiate these torrents, then they will have failed” (Ghosh 2017: 8)

Offill’s moral quandary above recalls Kristi McCluer’s famous photo of golfers at Eagle Creek in Oregon  calmly playing golf against a backdrop of forest fires caused by climate change. But of course the moral dilemma she describes applies to all of us, to some extent, in terms of being ‘part of the problem’ in relation to climate change. 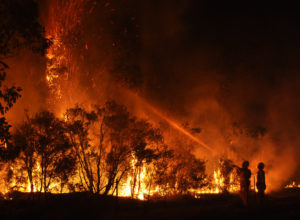 You should feel very bad if you question this

In Being Ecological, Timothy Morton iconoclastically frames his discussion with ‘not another information dump’. He says (almost sardonically) that ‘We all know that ecological writing. Needs lot of facts’ (Morton 2018: 7): ‘Ecological information delivery mode in the media seems most often to consist of what we could call an information dump...You should feel very bad if you question this.’ (Morton 2018: 9).

This guilt and (climate anxiety) may help explain why literary fiction has largely ignored the issues, while popular genres such as science fiction consistently put forward dystopian environmental future narratives. But as Ghosh unflinchingly asserts: ‘If certain literary forms are unable to negotiate these torrents, then they will have failed – and their failures will have to be counted as an aspect of the broader imaginative and cultural failure that lies at the heart of the climate crisis.’ (Ghosh 2017: 8)

“Developing divergent, creative thinking in an era of polarised political discourse is a challenge for our times.”

If divergent thinking is the thought process or method used to generate creative ideas by exploring multiple possible solutions – which can also be understood as arts thinking – it seems to me that this is an important part of the process of imagining alternative possible futures.

Divergent thinking is often anxious-making because it necessarily lacks the authority of a singular solution. But possibility thinking – the willingness to see possibilities everywhere instead of limitations – creates opportunities for dialogue and doing things differently. The protagonist in Weather is an archivist. Archivists have a very particular way of doing things, which contributes to the complexity of characterisation in Offill’s protagonist within the novel. Developing divergent,  creative thinking in an era of polarised political discourse is a challenge for our times.

Image by Clem Onojeghuo via Unsplash

Can art save the world? If it changes the way we think about, represent and imagine future worlds, then, yes, perhaps it can.

How the Light Gets In, The Lit, edited by Ben Smith and David Sergeant

The Great Derangement by Amitav Ghosh

Being Ecological by Timothy Morton

The Lost Words: A Spell Book by Robert McFarlane

Future Library  by Katie Paterson (‘One thousand trees were specially planted for the project in the Nordmarka forest at its inception;[1] the 100 manuscripts will be printed in limited-edition anthologies using paper made from the trees.’)