Looking for tips to help you craft that elusive story? Read on for creative writing prompts, exercises and challenges from our Room With a View online workshops. Now let me find that pen...

Exercise One – In This Room

A key part of being a good writer is to really pay attention to your surroundings and to translate what you can hear, see, smell, touch, taste and feel into words so that other people can experience what you’re experiencing. Focusing on the five senses is an important skill to develop as it helps to make your writing richer and multi-dimensional. It’s also a great mindful tool for creating calm. Win win!

A key part of being a good writer is to really pay attention to your surroundings.

For this exercise, try to stay in the moment. Take in your surroundings. What can you see, hear, touch, taste and smell where you are today? Maybe there’s a smell of recently brewed coffee. Perhaps you can hear the birds tweeting outside or members of your family having an argument in another room. For touch, you might just want to focus on the feeling of your fingers on the keyboard or the way the paper feels beneath your arm or the pressure of one leg on top of the other, the feel of floorboards beneath your feet, or you could explore other feelings too. And if your mind gets taken away to a memory of another time and place as you notice a souvenir from a holiday on the desk, feel free to follow that thought too. Allow yourself to write whatever comes to mind and don’t think too hard about it. You can always edit it later.

Exercise Two – Room with a View 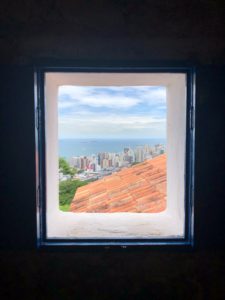 Windows and the views from them can be a rich source of inspiration for writing. They’re a boundary between one space and another, but a transparent boundary and a natural frame for writing. For this exercise, it’s probably easiest if you position yourself so that you can see out of particular window, but if you’ve got a good memory, you could also choose to write about a different view that you know well: maybe the view from a school window, or a holiday cottage that you might have visited. Follow the prompts below and allow your writing to get more fanciful and imaginative as you go on. Write in long sentences rather than making notes. Essentially, you’re constructing a poem, line by line.

You can also watch this video and follow the prompts included here:

Let’s turn our attention from writing poetry to writing fiction and imagine a story in which a character observes the world from their window. Perhaps they’re a person who loves to be nosey, or someone who simply enjoys watching the world go by. Maybe, in your writing, you might have a whole cast of characters that the main protagonist sees: the woman who walks the dog at the same time every day, the man who pushes the pram, the postman or woman. Or, you might want to focus on one particular person and one particular incident.

Effective fiction tends to focus around change so see if you can incorporate this into your story. Maybe the main character sees something that changes their perception of the world in some way or perhaps they see something that literally changes their world. Perhaps it’s something that they shouldn’t have seen and perhaps their decisions about what they do with that knowledge will drive the story. Maybe the change is simply that the woman stops walking the dog or that the post stops arriving. It’s up to you.

Effective fiction tends to focus around change so see if you can incorporate this into your story.

Here are a few suggestions to get you started:

In case you’re tired of looking out of your own windows at your own views, we’ve provided some different views for you to look at. Hopefully they might inspire you.

For this exercise, simply take one of the photographs and imagine yourself into the scene. You might be a character who is looking out of the window, or you might be someone in the scene beyond the window.

Use the following questions to help you to develop the character that you’re writing about. You might want to write a piece of fiction, but you could also write a poem about, or from the viewpoint, of the character. Most stories are driven by the desires of the main character and the obstacles that you, the writer, put in their way. You might want to think about that as you write.

We’re surrounded by objects in our homes and what can seem ordinary and boring can soon be transformed into something interesting if we bring our attention and imagination to it.

For this exercise, pick an object from the room where you’re sitting and use it as the starting point for a piece of writing.

You might want to tell the literal story of what it is and where it came from or you could make it the centre of a fictional piece. Maybe that little box from your holiday in Spain is actually a repository for all of the secrets of the universe, or perhaps your notebook is enchanted and everything you write in it becomes true.

Maybe that little box from your holiday in Spain is actually a repository for all of the secrets of the universe?

Another exercise to try is to write from the point of view of the object. How does it feel to be the necklace that no-one very takes out of the jewellery box or the book that someone bought just to show off but which never gets opened?

Maybe you could write about two objects and their relationship. Perhaps the salt pot has a vendetta against the pepper pot or maybe the fork is in love with teapot.

Have fun with it.

“It is perfectly okay to write garbage–as long as you edit brilliantly.’ C. J. Cherryh

Editing is a fundamental part of the writing process. Some writers enjoy the first burst of creativity more than editing, but others love that process of stripping out the unnecessary parts of their work and shaping it into a finished piece.

I like to imagine editing as being a bit like sculpting; the finished story or poem is in there and your job as an editor is to chip away at the raw materials (your first draft) to smooth and polish the final work of art. Most writers write several drafts before they get to a piece that they’re happy with and, if you want to be a writer, it’s an important lesson to learn, that something is rarely finished at the first attempt. Invariably there’s a lot that can be done to improve a piece of writing and sometimes the finished article bears little resemblance to the piece you started out with. You write as a writer, but you need to edit as a reader.

Here are some tips to help you to improve your first draft. 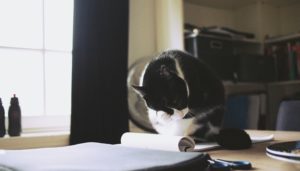 Editing poetry is a bit more complicated as poetry is more open to interpretation and individualistic stylistic choices but here are a few things you can look for.

Don’t forget to follow us on social for regular writing prompts and challenges; @thelitplatform / @theliteraryplatform.