The Literary Platform is Dead. Long Live The Lit Platform!

How did we get here? Via some setbacks, wet feet and wine – Anna Kiernan updates you on our relaunch.

In 2018, I went to The Bookseller’s Marketing and Publicity conference at the Barbican, which turned out to be the start of this story. It was a hugely relevant, optimistic event. I soon realised that was largely down to Sophie Rochester, then CEO at The Literary Platform.

So I invited Sophie to Falmouth to give a talk to my students.  And, shortly after that, she got in touch to ask if I’d be interested in taking over The Literary Platform.

I spent the next few months attempting to find the start-up funding necessary to make the takeover viable. And while I wasn’t doing that, I was trying to entice the most talented writing and publishing people I know to get involved.

After a few knock-backs, in September 2019, Arts Council England awarded us 45K to relaunch The Lit Platform. And I’m proud to say that our extended team is made up of a dazzlingly array of novelists, creative agencies and publishers.

A month later, our inaugural Lit Platform team meeting at Stranger Collective began as all such meetings should – with a Booker longlisted author wearing one shoe, scratching on a flipchart with a pen that didn’t work, as the rest of us drank wine. 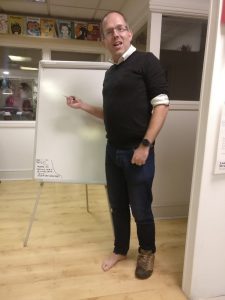 Despite the driving rain that night, we were joined by novelists, designers, festival organisers, academics, strategists and all manner of word nerds.

I am hugely excited about the team and about the possibilities for collaboration and engagement that are opening up for The Lit Platform, which is becoming a place to celebrate innovative small press publishing, storytelling, writing and culture in exciting, thoughtful ways in a networking hub outside of London.

We hope you’ll drop by to read our quarterly digital magazine and warmly invite you to get in touch if you have a story you’d like to share that dovetails with one of our themes.